Everything You Need to Know About the Twelve Steps 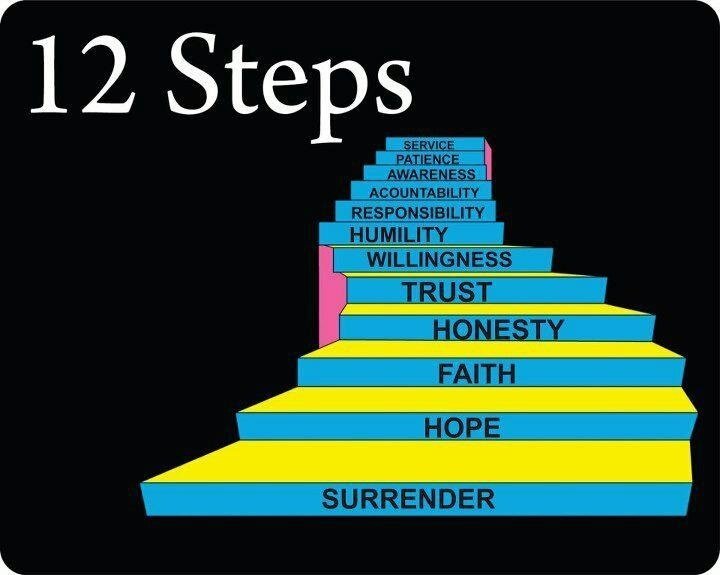 Everything You Need to Know About the Twelve Steps

What are the 12 Steps of Recovery

If you or someone you know is struggling with addiction or alcoholism, you may be wondering “what are the 12 steps?”.

The twelve steps are the backbone of all of the self help groups ending in “Anonymous”. Some of these fellowships include Alcoholics Anonymous, Narcotics Anonymous, Cocaine Anonymous, Heroin Anonymous, Sexaholics Anonymous, Overeaters Anonymous, Gamblers Anonymous, Codependents Anonymous, as well as various others. To put it simply, the 12 steps earned its reputation from the widespread success it had, helping even the worst-case alcoholics achieve long term sobriety. As the steps continued helping more and more people, it became the roadmap other groups followed to achieve and maintain recovery within their fellowship. Being a substance abuse treatment facility, we will mostly be focusing on the 12 Steps as they pertain to alcoholism and addiction throughout this article.

Who Wrote the 12 Steps of AA

If you’re someone who is considering to work the steps, you’re probably curious about who invented the Twelve Step Program. The 12 Steps of Alcoholics Anonymous were originally written by Bill Wilson and Doctor Bob; AA’s first two members. The first edition of the Big Book was originally published in 1939, and some revisions are made in each new edition that gets released, but the cadence of the steps have remained unchanged. They have helped millions of alcoholics and addicts get clean and experience long term sobriety and actually want to remain that way.

Where are the 12 Steps Located in the Big Book

It’s important to know that the original version of the Twelve Steps are located in a book titled “Alcoholics Anonymous”. Commonly referred to as the “Big Book”, the 12 steps can be found in Chapter 5: How it Works, on page 59.

Narcotics Anonymous published their own book when they finally received permission to use and base their program around the 12 Step Program of Action. Their book is widely referred to as The Basic Text by the NA community. The only change made to their twelve step program was swapping the word alcohol with our addiction in Step 1. In The Basic Text of Narcotics Anonymous the Steps are found in Chapter 4: How it Works, on page 17.

The Twelve Steps are also typically listed on posters in most AA (Alcoholics Anonymous) or NA (Narcotics Anonymous) meetings. If you don’t have the big book or basic text handy, not to worry, we will list the steps below.

Here is the Twelve Step Program of Action

How do the 12 Steps Work for All these Different Problems

Other fellowships began to form as people recognized the power these steps have to help overcome other things as well.  Following the same deviation NA did by changing a word in their First Step, other 12 Step Fellowships began to swap the word alcohol in step one with whatever relevant term applied to them. The fact is that this interchangeable paradigm has effectively helped hundreds of thousands of people since the late 1930’s. Today, AA’s 12 Step Program of Action has been adopted by over 30 countries around the world.

The fundamental logic behind this concept may make more sense when applied to our conceptual outlook we call “The Human Condition”. Everyone has a vice or a bad habit they struggle with. Some of these habits can be more outwardly destructive than others, such as a gambling or an overeating condition that is too hard to control or stop. There are many ways people use to minimize behaviors that get out of control. Whether it’s taking medicine, switching to a different behavior, intentionally (or unintentionally) hurting others, the gym, shopping, drugs… The 12 Step model has helped so many people that the medical community often recommends it as a part of regular therapy.

How Long Does 12 Steps Take to Complete

The process of going through the 12 Steps is an extremely personal and individual experience one has during their journey towards sobriety. Alcoholics Anonymous has a reputation for moving through the steps quicker than Narcotics Anonymous does, as they feel healing to be more effective if you write everything down. AA commonly encourages taking action, and feels it necessary to heal sooner than later, giving you a better chance of defeating the high statistics of relapse. Both perspectives on working through the 12 Steps are correct. The amount of time it will take to complete the steps is completely up to you.

Some work through the 12 Steps in less than two months. Others will take longer than two years. Try both fellowships out. Only you will know your own pace. Our best suggestion is to  seek out and mingle with people who already have been through the steps. Most meetings will identify those people in the very beginning, and suggest that you talk to them if you’re looking for a sponsor. If you are new and not even sure what a sponsor is. . . Don’t worry, we will be covering that in more detail in the next topic.

Can You Work the Twelve Steps Without a Sponsor

Some of the most common questions newcomers will ask when entering Alcoholics Anonymous or Narcotics Anonymous are:

Unfortunately there is not a concrete answer to these questions. Before diving into why, let’s first discuss what exactly a sponsor is.

A sponsor is a man or woman who guides you through the 12 steps of Alcoholics or Narcotics Anonymous. This is the core expectation of a sponsor. Many times, the sponsor will help his or her sponsee with other things but their primary purpose is to guide you through the steps.

I once heard an old-timer share in a meeting that “if you are going through the steps on your own, then your sponsor is an ass hole!”

Needless to say, a high expectation is placed that you get a sponsor from attending meetings. If you have heard the terms Fellowship and Program being tossed around, it’s important that you understand how they mean two completely different things:

The fellowship of NA or AA consists of the meetings, coming early and staying late, meeting people who are on the same journey as you. Even socializing at the diner after your meeting ends. These things are called “Fellowshipping” and play an important role in staying sober. However many people who have survived through the multiple relapses they had to endure from working half measures, will tell you through experience that just going to meetings is not enough.

The program of AA or NA refers to working the program of action that is outlined in the Big Book. It is the key ingredient to achieving both happy and long term sobriety, and breaking you free from the pain and suffering that you experience when you’re in the throes of addiction. In fact, the Fellowship was mainly created to make finding a sponsor easier, as meetings did not exist during the early years of AA.

Now that we know what a sponsor is, let’s go back to whether or not you really need one. Technically the answer is no. When AA started back in the 1930s there were only a few members in the entire United States. Alcoholics wanting to go through the steps at that time did not have the option of seeking out a sponsor to guide them. They were left to their own devices. That being said, today there are millions of members across not just the United States, but across the entire world. Time has revealed that working the steps with a sponsor is infinitely more effective. The “Do I need a sponsor” debate can be likened to a question such as “Do I need a hammer to drive a nail into a piece of wood?” As the Big Book was written, they knew many books would have to cater to the alcoholic in Alaska desperately searching for a solution to stay sober longer than a week. Or the isolated seaman that spends most of this time away from land. The big book was written to help people like these. So technically no, you do not, but having one will make your chances of staying sober infinitely easier and drastically increase your chance of success. It is the same way with a sponsor. We highly recommend you get one.

Are the 12 Steps Religious or Based Around Organized Religion

Probably 95% of people who walk into the rooms their first time undoubtedly question if the Twelve Steps have religious ties or even based around some religion. For some the idea that the Twelve Steps are religious or that the 12 Steps are Christian are extreme turn offs. The answer is no. AA and NA are open to individuals from all religious backgrounds, or those who are not religious at all. You can find members ranging from Roman Catholics priests all the way to staunch atheists. There is an entire chapter dedicated to this topic in the Big Book of Alcoholics Anonymous; it’s Chapter 4: We Agnostic.

Yes, you can work the steps without a belief in god. While you will hear the word God, or higher power fairly often in AA or NA, it is totally possible to work the steps without either of those things. It is highly recommended you seek out a sponsor with a similar belief system who can best guide you in this area. There have been scores of atheists who have gotten and remained clean and sober in the rooms of Alcoholics and Narcotics Anonymous. AA even provides free pamphlets about this topic because of how controversial and misunderstood the idea is.

Are the Twelve Steps Copyrighted

Yes! Each fellowship has their own copyright on their version of the 12 steps. Harbor Wellness and Recovery Center does represent itself as an agent of any of the 12 step fellowships in this article. We created this content simply for educational purposes. We are in no way associated with any of the fellowships mentioned above.